One week after succesfully organising and participating in the Annual Dingwall Hydrotherapy Puffin Pool – “Healthy Working Lives” 5k Run Walk Wheelchair event, raising much needed funds for this popular and well used facility, the Black 'n' Reds of Ross County Athetics Club travelled to the Chris Anderson Stadium in Aberdeen, for the Final of the Petrofac Athletics League. 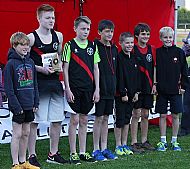 The league operates during the Summer months, in the North and East districts, with the top 4 teams in each age group, meeting to contest the Final. A busy day of run, jump and throw, in glorious North East sunshine, saw most of these young athletes achieving Personal Bests in a hotly contested, but friendly day of athletics competition. When the points were added up the Black 'n' Reds Under 11 Boys team finished in 3rd place and the Under 13 Boys, clear winners in their age group, returning home with a very well deserved trophy. The team on the day was: Arran Buchanan, Alex Ellen, Alister MacKay, Kyle Ross, Angus Rutter, Finlay Rutter and Kyle Sutherland. Ardoss's Arran Buchannan, fresh from a triple gold performance in the Age Group Championships in Grangemouth, set league records in the 100m (12.46s) and Discus (32.98m) results that put him in the No1 spot in Scotland.

Well done to our Age Groups who made it through to this year's Petrofac Final on 6/9/2015 at Aberdeen.

The U13 Boys and Senior Women going through as North District PETROFAC Leauge CHAMPIONS.  Well Done.

Contact the club to confirm your availability for selection for the final.